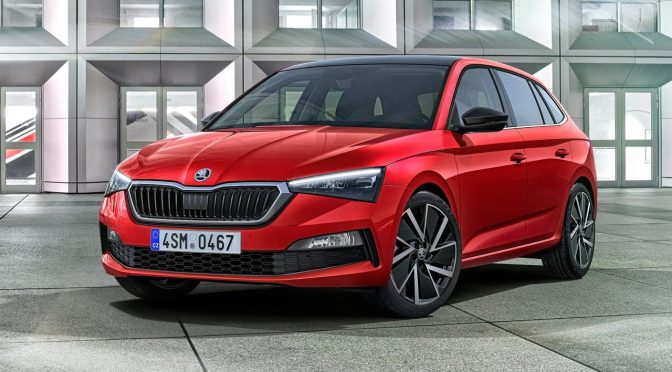 With a new character, new technology and a new name, the Škoda Scala completely redefines the compact car segment for the Czech brand. The fitting name ‘Scala’ comes from the Latin for ‘stairs’ or ‘ladder’. The hatchback combines an emotive design with a high level of functionality as well as state-of-the-art connectivity, and transfers the sensational design language of the VISION RS concept study into a production vehicle for the first time. A selection of five engine variants is available, with power outputs ranging from 66 kW (90 PS) to 110 kW (150 PS). In addition, the Scala offers a high level of active and passive safety, full-LED headlights and tail lights, plenty of space for luggage and passengers, as well as numerous Simply Clever features. It will be launched onto the market in the first half of 2019. By launching the Scala, Škoda is taking several steps in development at once and is completely repositioning itself in the compact car segment. With its excellent connectivity, high-quality equipment and exquisite materials, it perfectly represents the brand’s set of values, which are suitably encapsulated by the term ‘smart understatement’. The Scala thereby also appeals to a target group of younger, design-focused Internet users, who also attach importance to enjoying the Škoda-typical generous amount of space, the largest boot in the segment and great value for money.


The new Škoda Scala is the first production model to demonstrate the next development stage of the brand’s design language, which will also shape the car manufacturer’s future models. New sculptural shapes, dynamic design features as well as precision-designed details lend the Škoda Scala a distinct identity. The new compact car is Škoda’s first production vehicle in Europe to bear Škoda lettering across its tailgate instead of the brand’s well-known logo. With its perfect proportions, clearly defined surfaces, flowing lines and advanced aerodynamics, the new Škoda Scala comes across as modern and sporty. The front is striking with an upright radiator grille, a large air inlet underneath and side Air Curtains. The Škoda-specific tornado line makes the vehicle look longer and is in perfect harmony with the car’s dynamic roofline. The aerodynamically optimised roof spoiler and the sporty diffuser underneath the bumper shape the wide rear.

As an alternative to the standard tailgate, the car can be ordered with an extended rear window. In this case, the ‘Škoda’ lettering is featured on the window itself. In addition to the extended rear window, the Emotion package comes with a large panoramic glass roof including an electrically retractable sunblind as well as full-LED headlights and tail lights. Innovative LED headlights and tail lights also shape the Škoda Scala’s appearance and showcase the brand-typical crystalline features, which are emphasized by the Škoda Crystal Lighting lettering. The headlights are narrow and tapered; the razor-sharp designed tail lights with rear fog light shine in the brand-typical ‘C’ shape. The Scala is the first Škoda to offer dynamic rear indicators as an optional extra. The indicators are divided into individual LEDs. When the driver turns the indicators on, they flash outwards in a sweeping motion. The dynamic indicators are easily noticeable by road users, even in bad weather – an important contribution to improved road traffic safety.

The new Scala is the first Škoda based on Volkswagen Group’s state-of-the-art MQB A0 platform. The MQB is a uniform basis for numerous different cars. The modular transverse matrix makes extremely flexible and efficient production possible, thus allowing numerous innovative assistance systems from higher vehicle segments to also be offered in the compact car segment. The advantage of Volkswagen Group’s modular transverse matrix (MQB) is that the installation position of the transverse engines, which are tilted slightly forward, and the distance from the middle of the front wheels to the pedals are always the same. This allows for uniformity in the front end across all models and plenty of space in the interior’s front section. Other dimensions such as wheelbases, track widths, wheel sizes and seat positions are variable. Engines, transmissions, steering and chassis components can all be used in a modular way and combined in various ways. The MQB significantly contributes to keeping the weight down thanks to its use of modern designs and high-strength steel. Thanks to the large number of MQB models, it is possible to not only offer innovative assistance and safety systems such as Adaptive Cruise Control or proactive occupant protection system Crew Protect Assist in higher vehicle segments, but also in smaller models.

The new Škoda Scala comes with a choice of five different engines. They all feature direct injection as well as a turbocharger and, of course, fulfil the Euro 6d-TEMP emissions standard. For the Scala, Škoda is offering three petrol engines with a cylinder capacity of 1.0 or 1.5 litres as well as a 1.6-litre diesel. A 1.0 G-TEC that is designed to run on environmentally friendly natural gas (CNG) will follow later in 2019. All engines come with brake energy recovery and Stop/Start technology; the 1.5 TSI is also equipped with Active Cylinder Technology (ACT). The top-of-the-range 1.5 TSI engine enables the Škoda Scala to deliver 110 kW (150 PS) and achieve maximum torque of 250 Nm. This engine’s distinctive feature is its Active Cylinder Technology (ACT), which shuts down the two middle cylinders when engine load is low, thereby reducing fuel consumption. It does this automatically and virtually without the driver noticing. The four-cylinder engine is paired with a manual 6-speed gearbox as standard, but is available with a 7-speed DSG as an option. The two other petrol engines each have three cylinders and a 1.0-litre capacity. The power of the entry-level 1.0 TSI, which produces 70 kW (95 PS), is transferred by a manual 5-speed gearbox. The 1.0 TSI with a power output of 85 kW (115 PS) comes with a manual 6-speed gearbox as standard, but can be fitted with an automatic 7-speed DSG as an option. All of the petrol engines are equipped with a petrol particulate filter.

A Škoda always comes with a variety of Simply Clever features. The Czech brand is well-known for its clever details that make day-to-day life that little bit easier for its customers. And in typical Škoda style, the new Škoda Scala also provides a wealth of Simply Clever features – and not only the classics like the ticket holder on the A-pillar on the driver’s side, the umbrella compartment (incl. umbrella) in the driver’s door or the ice scraper in the fuel filler flap with a tyre tread depth gauge. The Škoda Scala is the first in its segment to come with an optional electric tailgate, which can be opened and closed at the push of a button thanks to the integrated Tip-To-Close function. It can also be closed by lightly pulling on the opened tailgate, thus making it easier to use the large boot. The boot can also be fitted with storage nets, a false boot floor, cargo fasteners and a boot barrier net as optional extras. Also new for the segment is the electrically retractable tow bar, which can be unfolded at the touch of a button in the boot. 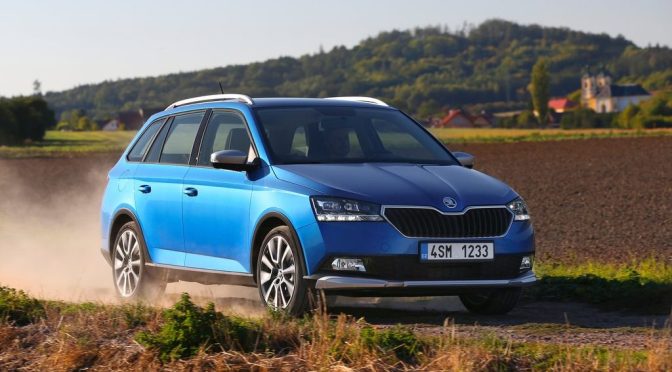 The Škoda Fabia Combi Scoutline advertises its adventure DNA with distinctive bodywork elements in matt black and silver as well as 16- and 17-inch alloy wheels. The new version will be available in selected European markets with all engines and all regular colours for the Fabia Combi.


In the new Škoda Fabia Combi Scoutline, a special front spoiler in matt black with silver trim emphasises the dynamic effect of the redesigned radiator grille and the narrower headlights. Matt black is also the colour for the wheel arch linings and side sills, with the wing mirrors and roof rails sparkling in silver. Like the front spoiler, the new rear bumper with diffuser Combines matt black and silver. The 16-inch Rock alloy wheels are included as standard in the Scoutline version; 17-inch Braga wheels in brushed anthracite metallic are available as an option.

The Škoda Fabia Combi Scoutline is available with the MPI and TSI engines from the Fabia model series. They each have three cylinders and a 1.0-litre displacement and comply with today’s most stringent EU6d-TEMP emissions standard. A start/stop system and brake energy recovery come as standard. The two TSI engines are fitted with gasoline particulate filters.

Of course, the Škoda Fabia Combi Scoutline also benefits from all the other improvements that went into the recently revised Fabia model series. The August 2018 update for the third most popular model from the Škoda vehicle range included a more distinctive exterior as well as new seat upholstery and a new instrument panel. For the first time, the Škoda Fabia can be equipped with optional LED headlights and taillights, while new assistance systems include Auto Light Assist, Blind Spot Detect and Rear Traffic Alert low. The latter uses radar sensors when reversing out of a parking space or driveway to watch out for traffic and alert the driver early on. Add to that new Simply Clever features such as two USB ports in the rear of the cabin, a double-layer floor mat and a removable LED lamp, rechargeable while driving and located in the largest luggage compartment in this class at 530 to 1,395 litres.