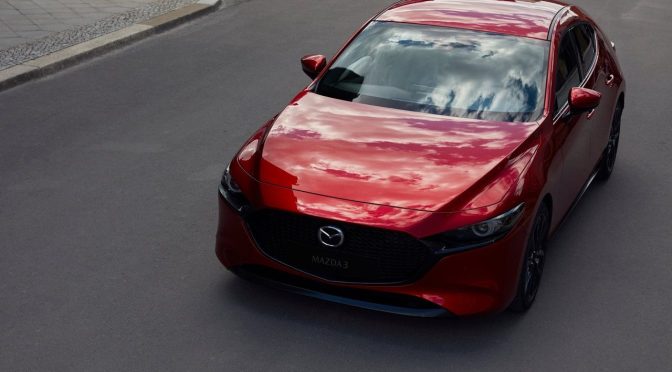 Introduced in 2010 and making its production model debut with the launch of the CX-5 and the Mazda6 in 2012, Mazda’s Kodo-Soul of Motion design has been a driving force in enhancing the brand’s global value. Mazda now takes it to higher levels of depth and sophistication as it enters a new stage that raises car design to the level of fine art. The goal for this new evolution of Kodo design is to express a new form of elegance inspired by Japanese aesthetics. The first cars to embody Mazda’s new design languagewerethe RX-Vision concept model shown at the 2015 Tokyo Motor Show and the Vision Coupe concept model exhibited at the 2017 show. Elements finely honed to create clean, beautiful designs combine with a delicate play of light and reflections to realize elegant and sophisticated styling with a natural, dynamic feel. The new Mazda3 is the first production model to adopt this evolved version of Kodo design. While featuring an extremely simple “single motion” to its overall form, the way light and shadows shift and reflections move over the body gives birth to a highly vital and dramatic expression that goes beyond previous iterations of the design language. Another goal in styling the new Mazda3 was to give the hatchback its own more emotional design, while the sedan aims to present more elegant proportions. Despite sharing the same Mazda3 model name, the two forms represent entirely different personalities.


In designing the hatchback and sedan versions of the new Mazda3, the development team took a fresh look at their respective values and personalities and then worked to maximize the unique appeal of each. The hatchback presents a powerful and seductive look with lasting visual appeal that evokes a sense of exciting experiences to come. In contrast, the clean, sleek and sophisticated beauty of the sedan speaks of maturity and refinement. The result is two body types with personalities so distinct one might even think they were completely different models. The design concept for the hatchback focused on creating a solid mass with a seductiveappeal that conveys a fresh expression of hatchback styling. When viewed from the rear, the cabin and body come together to appear as a single solid mass. This unique form realizes a powerful, solid presence and an expression of seductive and lasting appeal. The design concept for the sedan is “sleek and elegant.” While conforming to traditional sedan styling by bringing together the hood, cabin andtrunk as three distinct elements, the development team aimed to elevate those elements and achieve a new level of beauty that befits a Mazda sedan. The result is a refined, mature expression of elegance.

To further strengthen the connection between the car and driver, every aspect of the cockpit is laid out in perfect horizontal symmetry with the driver in the center. At the same time, every element is designed to directly face the driver and help emphasize the driver-centered axis that runs from front to rear. Furthermore, the interior incorporates the “less is more” ideal that is a key to the new Mazda3’s further-evolved KODO design. Keeping all elements other than the cockpit as simple as possible helps amplify the presence of the cockpit zone. This creates a comfortable environment in which the car and driver engage in a natural dialogue that enables the driver to focus on the task of driving. The cockpit design applies the “vanishing point” concept down to the parts level, including the steering wheel spokes and center display. Along with emphasizing the driver-centered axis running from front to rear through the cockpit zone, this design approach also expresses a second horizontal axis through the layout of the forms that run left and right from the instrument panel out to the door trim on both sides.

Mazda Connect now includes a Digital Owner’s Manual as one of its app offerings. When a warning appears on the center display, it also presents an indication of the priority level and a link to the Digital Owner’s Manual. The driver can then access the manual to quickly receive an explanation of the warning and instructions on how best to respond to the situation. Mazda conducted a series of new studies into how sounds are transmitted through a car’s cabin. This led to more efficiently improving sound quality by placing the bass speakers in the corners where the sound is amplified. To avoid the tonal quality of mid- to high-frequencysounds from being affected by reflected sounds, the other speakers were positioned on the left and right sail garnish and upper sections of the door trim where the sound is transmitted directly toward the occupant’s ears. This creates a more natural sensation to distinguishing the sound’s point of origin and enhances the depth and clarity of that sound. The 8-speaker standard audio system uses a 3-way layout, with 3L woofers positioned on the sides of the front cowl, a pair of 2.5cm squawkers on the sail garnish and 8cm squawkers on the upper section of the front and rear door trim. The 12-speaker Bose®sound system adds an 8cm center speaker, a pair of rear satellite speakers, and a subwoofer.

The ratio of ultra-high-tensile steel rated of 980MPa or higher is greatly increased, from the 3% used on the previous model to 30% on the new Mazda3. This combines with the addition of a new perimeter beam and rear side frames that deform in an accordion-style pattern to create a solid body that can stand up to impact force and a frame structure that effectively absorbs energy. The new Mazda3 introduces a new knee airbag for the driver’s seat. It is not only a first on a Mazda car,but will be included as standard equipment worldwide. By suppressing forward motion of the driver’s body in the event of a collision, this new airbag contributes to fewer injuries to the driver’s legs, chest and Each of the side airbags is divided into a front and rear chamber. Using reduced air pressure in the forward chamber and higher pressure in the rear chamber reduces the load taken by the rib cage, while firmly holding the body in place. The hood adopts a new energy-absorbing inner structure designed to receive the impact of a pedestrian’s head in the initial moment of contact and then gradually dampen the force to more quickly absorb the impact energy.