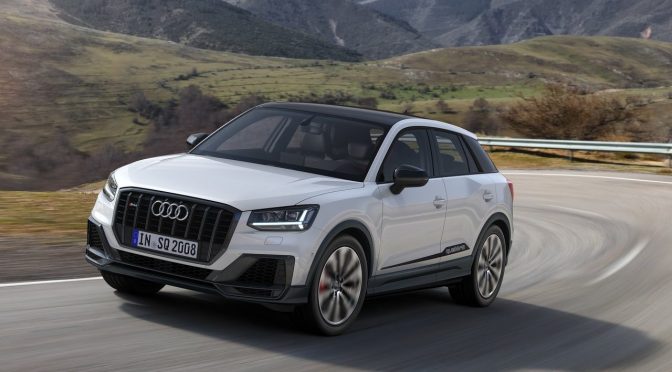 Striking design meets tremendously fun driving: Audi presented the SQ2 for the first time, the new top model of the Q2 family stands out in the compact SUV segment: It puts out 221 kW (300 hp), enough to sprint from 0 to 100 km/h (62.1 mph) in 4.8 seconds and a top speed of 250 km/h (155.3 mph). quattro all-wheel drive and the S sport suspension applies the power smoothly to the road. The Audi SQ2 is also at the head of its class with respect to operation, infotainment and assist systems. The four-cylinder TFSI in the Audi SQ2 is a high-performance, 1,984 cc engine. It responds instantly up to the redline at 6,500 rpm. In the dynamic mode of the Audi drive select dynamic handling system, it responds even more directly, with brief double-clutching accompanying the gear changes by the S tronic. The engine develops a particularly sonorous sound when driven dynamically. The 2.0 liter TFSI engine weighs only around 150 kilograms (330.7 lb), which benefits not just the total weight of the Audi SQ2, but also the axle load distribution.


Numerous high-tech features hone the profile of the powerful four-cylinder. The intake and exhaust camshafts are adjustable to optimize fill and gas exchange. On the exhaust side, the Audi valvelift system (AVS) adjusts valve lift in two stages based on demand. This reduces flushing losses in the combustion chamber and ensures optimal flow of exhaust gas to the turbocharger, particularly in the low rpm range. The advantages of this are agile engine response and a further increase of torque. Controlled by a fast and precise electric overflow valve, the turbocharger develops its maximum boost of 1.4 bar (relative) very dynamically. This engine management system enhances efficiency and reduces fuel consumption during operation under part load. Efficiency is also a major focal point with the 2.0 TFSI. Two electric-powered rotary valves consolidated into a module regulate the coolant flows. Another major component of the thermal management system is the exhaust manifold integrated into the cylinder head. It helps the engine to warm up quickly.

A seven-speed S tronic with a high spread of 8.7 between the first and last gears transfers the power of the 2.0 TFSI. The driver can operate the lightning-fast dual-clutch transmission in the automatic modes D or S, or shift themselves. If the Audi drive select dynamic handling system is in “efficiency” mode, the clutch disengages when coasting, allowing the compact sport SUV to freewheel. From a residual speed of 7 km/h (4.3 mph), the engine already switches over to start-stop operation. The seven-speed S tronic’s two clutches are in an oil bath. A small, mechanically driven gear pump supplies them with oil. At elevated demand, a second, electrically driven pump is activated. This efficient oil supply and the low friction of the individual components result in high efficiency.

As with every Audi S model, quattro all-wheel drive is standard in the SQ2. It combines high traction with fascinating handling. Its central element is a hydraulically actuated multi-plate clutch. It distributes torque continuously between the axles. If the front wheels lose grip, the multi-plate clutch can transfer up to 100 percent of the force to the rear within just a few milliseconds. The quattro drive’s electronic controller provides for the ultimate in driving enjoyment and safety. During sporty driving, it can direct torque to the rear axle as soon as the driver turns the wheel. Under acceleration, the torque literally pushes the fast SUV into the curve. The quattro management system enables precise turn-in during load reversal, and provides maximum control and reliability when drifting on a low-friction road surface. During fast driving, the quattro drive works closely together with the wheel-selective torque control, which smooths out the handling with tiny braking interventions at the inner wheels under reduced load.

The base Audi Q2 is already an SUV with a very distinctive character. The wedge-like architecture and precise body line, the flat cabin, the polygonal indentation on the flank and the blade on the C-pillar give it an unmistakable appearance. Audi has further honed the exterior design for the S model. The front end alone indicates the special position occupied by the vehicle. Eight upright double bars divide the large, octagonal Singleframe grille. A front splitter joins the outermost edges of the two dominating air inlets to underscore the full width of the brawny Audi SQ2 front end. The standard LED headlights and LED rear lights with dynamic turn signals radiate a characteristic, arrow-shaped light signature. Striking details also set accents on the flanks and at the rear. The trim strips in the lower region of the doors are strongly contoured; the exterior mirror housings sport a shining, aluminum-look finish.

As in the Audi Q2, the infotainment range in the SQ2 covers a broad matrix. At the top is the MMI navigation plus with MMI touch. Its menus are clearly structured, and the rotary pushbutton on the center tunnel console includes a touchpad that also enables multi-finger scrolling and zooming. Voice control and MMI search are also fast and reliable. Just a few letters or words are usually enough to get the desired result. The MMI navigation plus has an 8.3-inch display; the data transmission module supports the fast LTE wireless standard and includes a Wi-Fi hotspot for the passengers’ mobile devices. MMI navigation plus also includes the Audi connect package (optional with MMI navigation). A SIM card permanently installed in the car, the Audi connect SIM, brings numerous online services on board, including traffic information online, navigation with Google Earth, travel and parking information and access to Twitter and email.

The driver assistance systems for the Audi SQ2 come from the full-size class. Audi pre sense front is standard and uses radar to recognize hazardous situations that can occur with crossing pedestrians or other vehicles in front of the car. The system warns the driver acoustically and visually, and initiates emergency braking if necessary. This can help to avoid or reduce the severity of a collision. The assist package bundles the most popular optional systems, including adaptive cruise control with stop & go function and the traffic jam assist, which in addition to the radar sensor also uses the front camera. At speeds up to 65 km/h (40.4 mph) on well-developed roads, it can assist with steering, accelerating and braking.