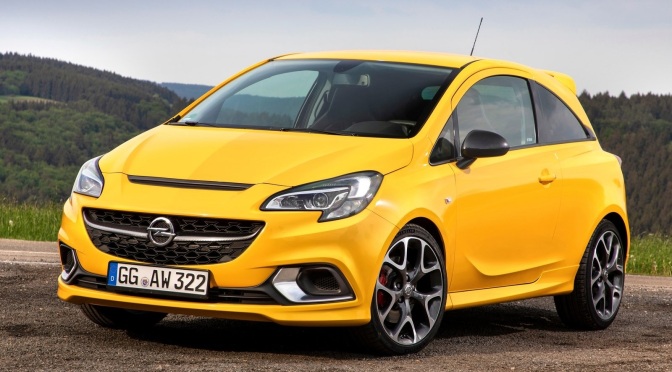 The eagerly-awaited new Opel Corsa GSi has arrived. After the Insignia, the Corsa is the second GSi model on offer. The newcomer impresses with its ultra-precise OPC chassis – for exemplary handling and short braking distances. The Corsa GSi is powered by Opel’s lively 1.4-liter turbo with 110 kW/150 hp and 220 Nm of torque. The four-cylinder power unit features a special GSi-calibration for increased responsiveness. Mated to a short-ratio, six-speed gearbox, the engine delivers outstanding punch in second and third gears, as well as a maximum torque plateau from 3,000 to 4,500 rpm.


The “hot hatch” from Rüsselsheim is therefore very quick off the mark (zero to 100 km/h is covered in only 8.9 seconds) and impresses with great elasticity: it takes just 9.9 seconds to accelerate from 80 to 120 km/h in fifth gear. Top speed is 207 km/h. The sporty Opel Corsa GSi can be be ordered for €19,960 (RRP including VAT in Germany). The OPC chassis and the disc brakes with red calipers have been set up on the legendary Nürburgring “Nordschleife” by Opel’s Director Performance Cars and Motorsport, Volker Strycek. Agile handling and short braking distances are guaranteed, especially when combined with the optional 18-inch light alloy wheels with 215/40 ZR18 sports tyres.

The high performance of the new Opel Corsa GSi is complemented by the athletic exterior looks featuring large air intakes, sculptured bonnet, prominent rear spoiler and precisely modelled side sills. From the front, the bold Opel GSi fascia with large honeycomb grille and the central Opel Blitz supported by two wings, along with the exterior rear view mirror housings in carbon racing-look become visible. The large chrome-ringed design elements that are visually connected in a horizontal line via black crosspieces running across the front, along with the black traverse cleat on the bonnet support the impression of sportiness. The vibrant styling is also present when viewed from the rear. The prominent spoiler on the edge of the roof creates additional downforce, the sporty chrome tailpipe is framed by the vibrant design of the rear apron in body colour.

Sporty GSi cars have a long tradition at Opel. The first to raise the adrenalin level were the Manta GSi and the Kadett GSi (115 hp from 1.8 litres) in 1984. Only four years later the 2.0-litre DOHC 16-valve engine in the Kadett 2.0 GSi 16V delivered 150 hp. The first Astra also featured this engine. The Opel Corsa GSi family was founded in 1988 by the 100 hp Corsa A (now a much sought-after classic) Then came the Corsa B GSi 16V with 109 hp and a powerful low-end torque characteristic, the Corsa C GSi with 125 hp and a top speed of 202 km/h, and from 2007 the Corsa D GSi, for the first time with turbocharging and 150 hp from 1,600 cubic centimetres. In August 2012 Opel and the Corsa took a break from the GSi – until September 2017. At the Frankfurt Motor Show (IAA), the Opel Insignia GSi celebrated its world premiere and the GSi label its comeback. And one year later, the Opel Corsa GSi has returned too.