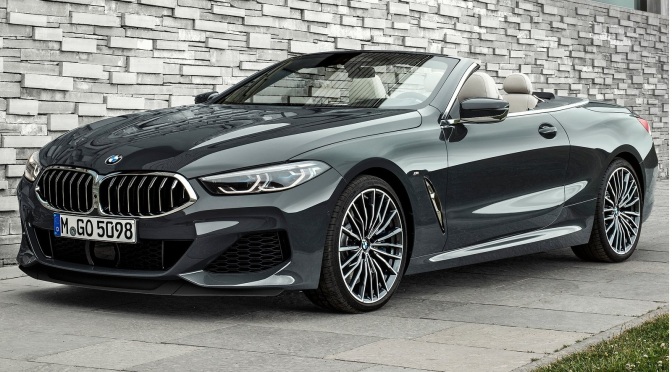 BMW is forging ahead with its model offensive in the luxury segment with the presentation of an open-top sports car which explores the highest reaches of dynamic flair, emotionality and exclusivity. The new BMW 8-Series Convertible blends ultra-sporty driving properties with distinctive design elegance and an extremely exclusive taste of driving pleasure in an open-top four-seater. The newly developed soft-top roof enhances the two-door car’s low, sporting lines when closed – and its sweeping elegance once open. The powertrain and chassis technology developed for the BMW 8-Series was tuned on the race track as well as the road. It serves up impressive performance attributes and peerless levels of poise and assurance, all of which are experienced with even greater intensity when the sun and wind are invited in. Model-specific equipment features designed to enhance comfort and state-of-the-art innovations when it comes to control & operation, driver assistance and connectivity serve up an open-top experience as modern as it is luxurious.


The growth of the BMW 8-Series range to include an open-top sports car for the luxury segment once again augments the brand’s presence in this vehicle class. The expansion of its luxury car portfolio is one of the future-focused areas the BMW Group has identified – as part of its NUMBER ONE > NEXT strategy – to secure the company’s long-term growth. The distinctive character profile of the new BMW 8-Series Convertible allows it to put down a particularly attractive marker in this market segment and win over new target groups in the process. The open-top model will be produced alongside the BMW 8-Series Coupe at BMW Plant Dingolfing. The Bavarian facility is the traditional birthplace of the BMW 7-Series Sedan and boasts outstanding expertise in the manufacture of luxury cars. The worldwide market launch of the new BMW 8-Series Convertible will begin in March 2019.

The brand’s new design language employs a small number of precisely drawn lines and generous surfacing to give the new BMW 8-Series Convertible a sporting yet elegant exterior appearance. Powerfully curved surfaces showcase the sports car’s athletic character. The body cuts a dynamically stretched figure with the roof down especially, but its distinctive lines are also in evidence when the soft-top is closed. The compact fabric roof extends less far into the rear end than the roofline of the BMW 8-Series Coupe, creating a prominently stepped silhouette which accentuates the deck-like rear end of the BMW 8-Series Convertible to impressive effect. The proportions of the new BMW 8-Series Convertible reveal a sports car that rides close to the road. With an exterior length of 4,843 millimetres, width of 1,902 millimetres and height of 1,339 millimetres, plus a 2,822-millimetre wheelbase and track widths of 1,619 millimetres (front) and 1,642 millimetres (rear), its dimensions match those of the BMW 8-Series Coupe almost exactly. The singular elegance of the luxurious convertible therefore shares centre stage with its clearly advertised dynamic allure and emotionally engaging performance attributes.

The driver and passengers on board the new BMW 8-Series Convertible are protected from the elements by a classical soft-top. When opened, the soft-top stows away under a sophisticated cover whose surface structure and stitching matches those of the instrument panel and interior door/side panel trim. The result is an all-encompassing look for the interior. Two subtle domes at the level of the rear seats reprise the “double-bubble” contouring reminiscent of classical sports cars, which are also integrated into the roof surface of the BMW 8-Series Coupe. The surrounds of the soft-top lid are High-gloss Black as standard and fit flush with the side window borders. The new BMW 8-Series Convertible’s roof opens and closes fully automatically and at the touch of a button located in the control panel on the centre console. 15 seconds is all it takes. The extremely hushed roof operation can be activated with the car travelling at up to 50 km/h (31 mph). The new BMW 8-Series Convertible comes with a black soft-top as standard, with an Anthracite Silver effect variant available as an option.

The new BMW 8-Series Convertible’s richly exclusive take on the sporting aesthetic imbues it with a very distinctive aura. The new BMW design language exudes modernity, precision and emotionality, and creates a dynamic and simultaneously graceful appearance. Shining a vivid spotlight on the car’s standout sporting ability is the protruding front apron with large air intakes. These make an even more dominant impression on the BMW M850i xDrive Convertible (as standard) and BMW 840d xDrive Convertible (as part of the optional M Sport package). A single-piece surround frames the two elements of the low-set BMW kidney grille, whose hexagonal outline widens lower down. The extremely slim headlight units extend far into the car’s flanks. The standard LED headlights generate daytime running light, low beam and high beam light from both light tubes, ensuring the signature BMW look is on display at all times. The optional BMW Laserlight with variable road illumination and Selective Beam generates a high-beam range of around 600 metres. Blue accents inside the twin headlights and “BMW Laser” lettering signal the presence of this highly advanced lighting technology.

An almost fully sealed underbody, active air flap control with adjustable kidney grille slats and Air Curtains in the front apron optimise the new BMW 8-Series Convertible’s aerodynamics. Added to which, narrow exterior mirror bases mounted directly on the side-window weather strips reduce the car’s drag coefficient. The front spoiler extension on the BMW M850i xDrive Convertible underlines its rigorously aerodynamics-focused design. An intelligent mixture of materials helps to reconcile exacting and conflicting demands when it comes to combining body rigidity with minimised weight. The use of high-strength steels and aluminium in the body structure plays a key role here, similarly the construction of the soft-top roof and use of carbon-fibre-reinforced plastic (CFRP) around the centre tunnel. The focus on exceptional body rigidity for the vehicle concept underpinning the BMW 8-Series models means that only a small number of additional convertible-specific and weight-increasing measures were required. These are restricted to additional cross struts and a specifically designed shear panel for the underbody.